Currently deploying an upgrade of PVS 6.1 at work.  Our current version of PVS is 5.1, which is EOL.
PVS 6.1 is a pretty significant upgrade.  I especially like the new Maintenance/Test/Production lifecycle management features.
Posted by Unknown at 11:55 AM 1 comment:

Went to check out the One X at the local AT&T corporate store today (on Townsend near AT&T park.)

The white demo unit was dead but they were nice enough to charge it up for me.

It well be available May 6, and I'm thinking of picking one up and handing my skyrocket down to my daughter, but I'm not sure I can live with the fact that it only has 16G of storage and no option to add a micro SD card.

Posted by Unknown at 5:13 PM No comments:

I do love a new toy

It's called ScribeFire and so for it's great.

Might even get me to blog more than once every 2 years.

Posted by Unknown at 6:19 PM No comments:

Check me at Vox

In my relentless pursuit of novelty, I've created a new blog at Vox, which is where my new posts seem to be going.

Check it out here.
Posted by Unknown at 8:16 AM No comments:

What be your pirate name matey?

My pirate name is:

Even though there's no legal rank on a pirate ship, everyone recognizes you're the one in charge. You have the good fortune of having a good name, since Rackham (pronounced RACKem, not rack-ham) is one of the coolest sounding surnames for a pirate. Arr!

Get your own pirate name from piratequiz.com.
part of the fidius.org network Well, not a bad week after all.


Ainsley had her 4 week doctor's appointment. She's doing great, and now weighs 7 pounds, 14 ounces. Which means she put on 1 pound, 11 ounces in 2 weeks.

Bob, Rod, Milan (my Sox auditor) and myself got together for beer and appetizers at the Fault Line. Milan had to leave early (something about his wife being hungry) but a good time was had by all. I tried the Cask Conditioned, the Best Bitters, and the Stout and quite enjoyed them all. The tempura Ahi Tuna Rolls are most excellent, and the Calamari (something I don't usually go in for) was actually quite nice.
With all the trash talking, objectification of women, and general bad behaviour, I'm afraid it was a bit like a 3 hour Man Show (Milan excepted.)

My Sox audit went as well as can be expected, and although I have quite a to-do list, Milan was (as always) entirely reasonable, pragmatic, and not one bit pedantic.

Despite no longer working with Bob, I think I had lunch with him 3 times since the layoff. I expect this will drop off once he quits his lollygagging and obtains gainful employment once again.
Posted by Unknown at 11:19 AM No comments:

The Girl with Error Message Eyes 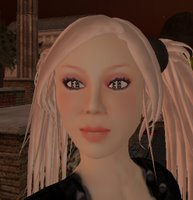 Saw this on Boing Boing

Intriguing example of accidental art / social commentary.
Apparently due to systems problems on Second Life, the textures for this models eyes are missing, and have been substituted with error messages.

It does seem that Second Life (and to a lesser extent the entire MMORG trend) are really beginning to resemble the virtual worlds written about by authors such as William Gibson.

I'm going to have to check out second life. Seems like a virtual Burning Man meets the Sims.
Posted by Unknown at 11:03 AM No comments: